A Little Touch of Harry In the Blight: Henry V in 1944 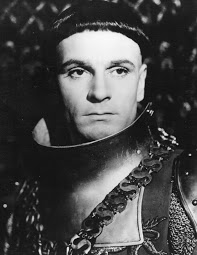 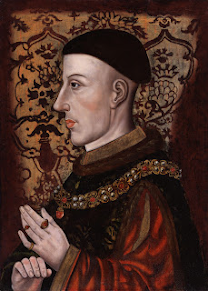 England, 1944: still fighting in World War II.  In the fall of that year, Laurence Olivier's film version of Shakespeare's Henry V was released, two months after D-day.  It had been in production since the year before.  During this time, England was a drab place indeed, ravaged by the German Blitz bombings of 1940-41, and by 1944, though hope was increasing, there were shortages of things everywhere, the country was still in a belt-tightening wartime mode, and V-E Day would not come until May of the following year.  This film was made with backing from the British government's Ministry of Information, with an aim to giving some respite to the British public during this dark period, and this was the reason that the most brutal episodes of Henry in Shakespeare's play, such as the execution of the three treacherous English noblemen by order of the king were cut, and  Henry's basic aggressiveness in invading France at that historical moment was glossed over, and the whole justification of the war, the issue of Salic Law, was made comic, while the doings of Pistol, Nym and their mates were rather sanitized.

Many of the criticisms made by film historians have to do with the integrity of Shakespeare's play itself, and its proper context within the grouping of Henry V, and Henry IV, parts I and II.  To my reasoning, all of choices made in this production was the logical outcome of the film as a stand-alone production and the circumstances that drove its making in the first place. In that sense, it is more akin to Sergei Eisenstein's Alexander Nevsky (1938), also a morale-raising propaganda movie, which probably influenced Olivier's treatment of the Battle of Agincourt.

Olivier and his production crew envisioned his version more as an extravagant pageant--an unreal, exciting yet comforting vision of a battle far removed from the realities of World War II, coming to us from a galaxy far, far, away. Not only that, there are two separate moments in time depicted here, one as a staged performance being done at the time of Shakespeare's Globe theater, the other, concerning the actual battle, in France of 1415, with a return to the Globe in 1600 at the end.  In addition, the film was shot in Technicolor, with its bright saturated colors, making the Battle sequence even more spectacular.

The Globe theater scenes are filmed with a zoom-in Smithsonian "Arial Britain" style over a pristine model of 1600 London and seamlessly into the little Globe "wooden O" theater where the play itself is presented, with views of both audience and backstage, with the initial scenes in Elizabethan dress.  The style of the actors'

presentation is exaggerated with broad gestures and declamatory manner, and audience response is very robust. The makeup is equally exaggerated.  There's even a rainstorm drenching the audience and players, but the show goes on. William Walton's score--contemporary British orchestrations of period music, provides accents.

As soon as Henry begins his departure in Southhampton we enter the even more imaginary world of the 15th century as is verbally invoked by the play's Chorus.  We know it is fantasy, because suddenly we've entered a 15th century as it is pictured in manuscripts of that period. Landscapes are painted with tilted perspectives, the distant fortresses also tilted--and broadly painted too.  This is staged as are the Globe sequences, but in a totally different way, particularly as envisioned with the eyes of the Limbourg Brothers' celebrated book of hours of

1416--the Très Riche Heures of the Duke of Berry.  The costume references are so specific, that the Duke of Berry in the play is dressed in a costume that almost exactly matches his portrait in the January Calendar page.  The costumes of the other men invoke the same source, right down to the bowl-shaped haircuts of the younger men, the tall hats and turbans or chaperons on their heads, colored tights and long robes or shorter doublets.

The interior set of the King of France's palace evokes the images of architectural interiors in the illuminations too: thin columned and almost pavilion-like, some of these columns lacking shafts so as not to mask the characters' actions, and an interior entry point so tilted as to resemble a street access to a subway entrance marquee in New York City.

These sets, and the painted landscapes with their bird's eye views of distant high castles and vertically sloping pathways are invocations of the labors of the month calendar pages from the Berry manuscript, brilliantly achieved by matte paintings produced by Walter Percy and his associates. These create seamless setting for the real actors, skillfully placed so as not to seem out of scale. Foregrounds often have jagged rock faces.

Added to this festive artificiality is the color scheme of the costumes in the fifteenth-century sections.  They are bright in hue and conceived in broad sweeps of ultramarine and vermillion--expensive pigments back then, as well as yellow, grass green, and of course a lot of metallic silver for armor. When the foot soldiers are massed, we are shown tiers of helmeted figures holding flags and spears.

The battle scenes were filmed in Ireland in actual landscapes, fairly flat and very green. The charge of the French troops certainly owes much to Eisenstein's filming of the battle on the ice of Alexander Nevsky, but here they are also like the battles in French Manuscripts, including one in Enguerrand de Monstrelet's Chronique de France of the battle of Agincourt itself (though the actual illustration postdates the battle by eighty years).

Paradoxically, the lines in the 1415 sections are said much more naturalistically than those at the Globe. The rousing cheerleading of Henry's "Sts. Crispin and Crispinian speech, recited this way, serves to introduce the battle of Agincourt itself. The ground is muddy, as has been historically noted, but not enough to impede the French charge. There is blood and chaos in the battle, but certainly no hacked-off body parts.  One of the most exciting special effects here is the perfect grid pattern of the English archers' arrows against the sky hurtling towards the mounted French troops.  I've seen this film several times in theaters, and the audience gasps as this happens every time; it's as good as any modern special effect. Towards the end of the battle, when Henry unhorses the Constable of France in single combat, the battle becomes a tournament.

The set-pieces of the battle, the scenes at the French court and Henry's wooing of the Princess Katherine are all presented in the "International Gothic" conception of this fifteenth-century world.  The viewer gets so enchanted that incongruities are accepted. The battle took place in October, but the scene suddenly switches to the

dead of winter so that the snow-covered February page of Berry's hours can be used for the interlude scene of Fluellen and his leeks, then switching abruptly back to the autumn of 1415 so that Henry can court his Princess.Everything resolved, it's back to the Globe again where the actors portraying Henry and Katherine are seen once more in Elizabethan dress.

If we look at his film today, we actually have to deal with not two, but four time periods. Besides the two shown in the film, we need to be aware of the late World War II environment when it was released and towards which it was aimed. Early showings of the movie had an inserted dedication to "the commandoes and Airborne Troops of Great Britain the spirit of whose ancestors it has been humbly attempted to recapture."  And now, some 76 years later, we have to consider the film's debut in the historical context of that 20th century war. Maybe in our own bleak times of fire, flood, plague and conflict, we could use another movie like this one.

You can rent the 1944 Henry V from Amazon

Here are a few websites that discuss technical aspects of making this film:

Many interesting posters and stills from the movie can be found at:

http://michaelpjensen.com/henry_v_1944_page_1 (there are additional pages)

Here are three diverse reviews/discussions on this film:

And an excerpt from Andre Bazin's What is Cinema: 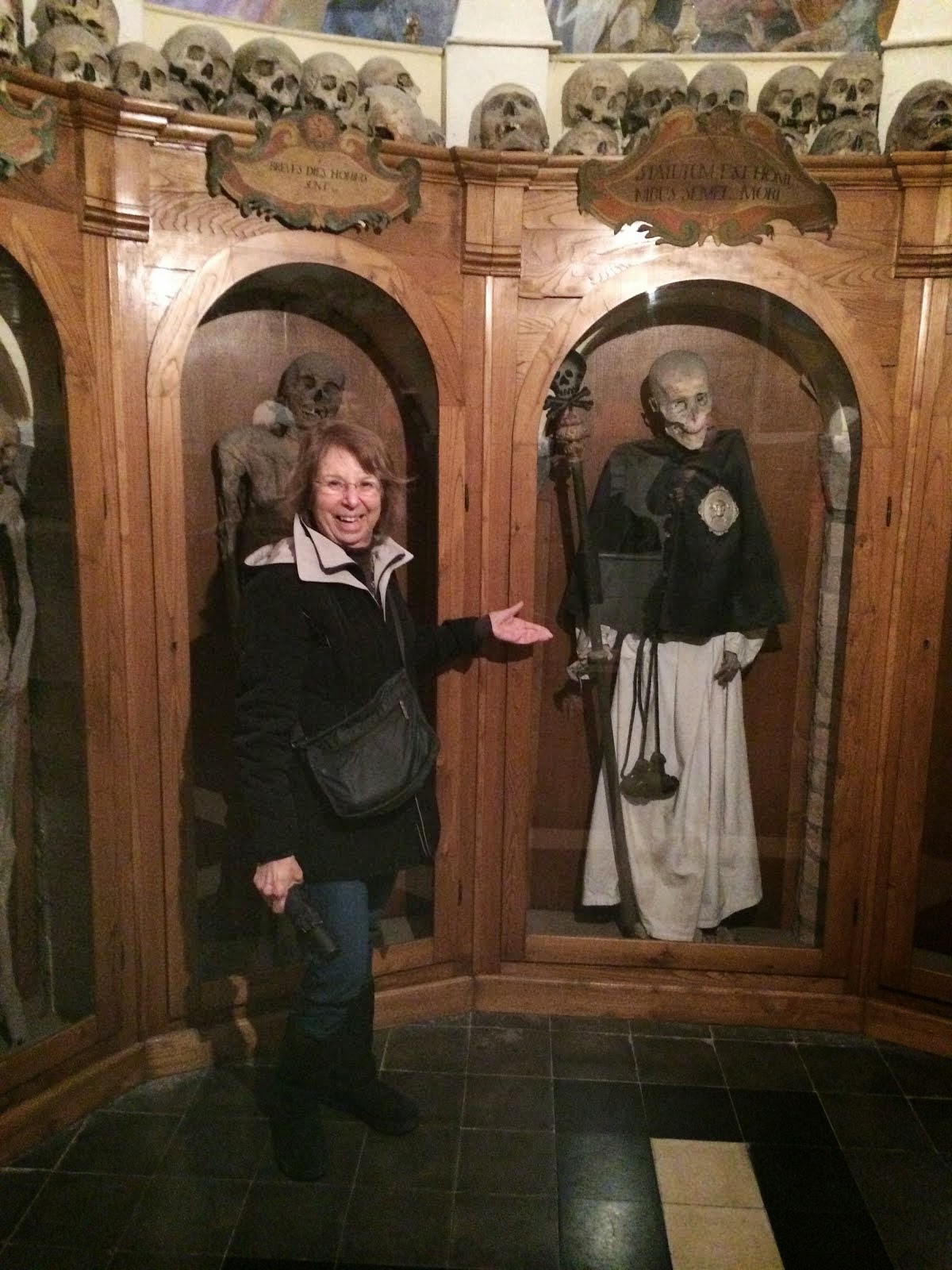 Judith B. Sobré
I am Professor Emerita of Art History at the University of Texas at San Antonio since 1974. My chief academic interest is Medieval Spain, but I have become increasingly interested in the intersection of art and popular culture, and this is what I will write about here, at very irregular intervals.